Get a Quick Quote
Categories 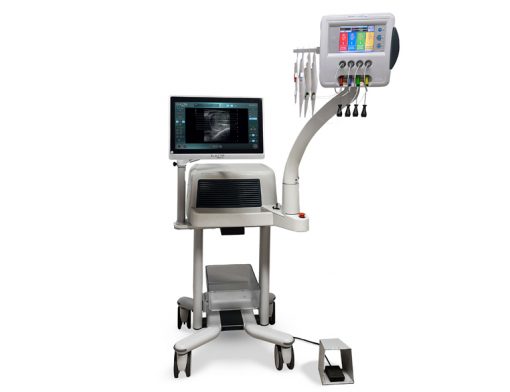 National Ultrasound is the exclusive U.S. dealer of the Elesta EchoLaser EVO*. Key clinical applications are ModìLite(head and neck lesions) and SoracteLite(prostate and kidney pathologies). This system works with most ultrasound machines as a micro-invasive, atraumatic, anesthesia-free, outpatient treatment of soft tissue tumors. It is the only micro-invasive treatment option in the U.S. The Echolaser EVO is intended to perform ultrasound guided laser ablation coagulation of soft tissues.

Read about the Physicians—Dr. Augustin Andrade, Chief of Endocrinology Department at Mount Sinai Medical Center in Miami, FL and Dr. Eric Walser, Chairman of Radiology at UTMB in Galveston, TX—currently using this product in our blog post, here.

Enables large volumes of coagulative necrosis obtained with perfect control of the borders, even in larger lesions. The operator can use up to four laser sources which work simultaneously in relation with the volume of lesions to be treated. Each laser source is independent from each other, both in activation and power adjustment, allowing the user to tailor the treatment depending on each clinical situation.

Ultrasound Guidance of the Treatment:

Enables real-time monitoring of the treatment. ESI reproduces the ultrasound image in real-time, giving indications to physician on possible treatment options in terms of applicators positioning trajectories and attended ablation area with respect to number of fibers used and eventual pull-back maneuvers performed.

The technique with very fine needles (<0.8mm) is completely atraumatic and very well tolerated by the patient, ensuring fewer complications and side effects.(Outpatient, no anesthesia)

Clinical evidence has been gathered in multiple applications including thyroid nodules and benign prostatic hyperplasia with more than 50 publications. Key papers on Thyroid and Benign Prostatic Hypeplasia are reported below:

Outcomes and Risk Factors for Complications of Laser Ablation for Thyroid Nodules.

A comparison of laser with radiofrequency ablation for the treatment of benign thyroid nodules: a propensity score matching analysis.

Benign Thyroid Nodules (BTN) Safety and efficacy of thermal ablation (radiofrequency and laser): should we treat all types of thyroid nodules?

Transperineal laser ablation for percutaneous treatment of benign prostatic hyperplasia: a feasibility study. Results at 6 and 12 months from a retrospective multi-centric study

We have a technical support team to help with all your ultrasound service needs, from preventive maintenance to technical issues. Call 800.797.4546 and ask for service.

Our customer service team is available from 9am to 5pm EST. We offer domestic and international shipping for your convenience. Call us today at 800.797.4546.

Our sales team has over 250 years of combined experience in ultrasound sales and sonography. Call us today at 800.797.4546 for more info about pricing and ultrasound applications.